Our night at Disney on Ice kept getting better. The hockey arena, which I had expected to be cold, was very comfortable and friendly. The show was introduced by the Big Four: Mickey, Minnie, Donald Duck, and Goofy. Belle’s journey into the Beast’s castle was well-told, with a fine dance number performed by flatware and candlesticks.

This was when I realized that my camera was not catching any nuances of the characters. The bright spotlight turned the beautiful costumes into shiny bits moving about on the ice… this was disappointing, as so much of the delight of telling about the show is showing the show. I also realized that videos were more successful… but I can’t yet insert video into this blog. Blog fail, again. Sorry.

There was confusion in my story-telling soul as the show continued, because the writers had felt the need to frame the showcase of Disney characters as a re-telling of the story of another Disney character, Riley from Inside Out. True, this allowed all the different costumes and colors to make sense, but was also jarring… whatever fantasy world each character would take us to, we were pulled back into the very UN-fantasy world of feelings….Joy, Sadness, Fear, and Anger… the least nuanced, most obvious, and, truthfully, most irritating characters of all.

That said, I went along for the ride and was not disappointed. The combination of beautiful lighting and costumes, expert skating, great sound quality and classic stories carried me on a wave of Disney joy. Maleficent and her mirror from Snow White showed us good projection techniques. Ariel and Prince Eric did some amazing high-rope tricks, leading me to think “An Aerial Ariel”?

Jasmin and Aladdin satisfied my need for Olympic skating skills with all sorts of lifts, skips, and flips. Then Rapunzel and Flynn Rider raised the bar. A 60 foot long scarf, representing Rapunzel’s hair, dangled from the ceiling and the two skaters grabbed hold and flew, swirled, and counterbalanced each other in a terrifyingly beautiful routine. As we were still catching our breath, intermission was upon us.

The second half started with a long re-telling of Finding Dory. The costumes weren’t as successful as some, making the skaters look like fish-human hybrids in a weird way. Also, Hank the octopus seemed to be an oversized, remote-controlled Roomba, with little movement or character. I don’t know how I would have done it better, but it didn’t magic me.

Then came what all the little princesses had been waiting for: Frozen! The story was shortened to focus on the relationship of Anna and Elsa, with enough Olaf for pathos and Hans and Eric for romance. 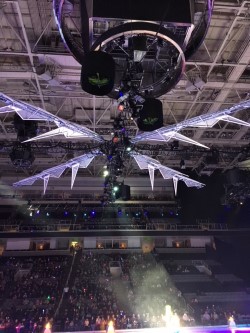 The final number featured a self-driving bridge and an ice castle that unfolded from the ceiling. “Let it Go” rang through the arena as Elsa skated her heart out around the rink and up the staircase, nearly touching the crystal lights dangling from the ceiling. Hundreds of little girls and their mothers sang along. We were riveted.