As you can see, I am posting even without my big computer! Clever Auntie Bridgett taught me how to upload photos with my iPad! What would I do without my wonderful people?

After sightseeing to the north of Tillamook on Saturday, on Sunday we headed south! First we all had breakfast in our tiny house at Sheltered Nook, took Bridgett to the “Ice Hangar” at the Tillamook Air Museum, and headed towards Lincoln City. 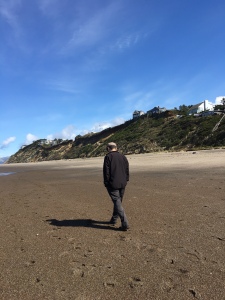 The day was much sunnier than the day before, but still cold enough that we needed coats and hats. The views from the cliffs were spectacular, and it seemed we were living inside every postcard of the Oregon Coast. Since highway 101 also runs a bit inland, we got to see the forest as it was waking up from winter. Huge meadows had become daffodil farms and were blooming in yellow and white stripes. Bare birch trees arching over the road promised a green tunnel when they leaf of in a week or so.

food today was a mixed bag. The pastries at My Petite Sweet in Lincoln City were wonderful, but at The Dory, just north of town, we got burnt, limp french fries and and over-sized, over dressed “chicken wrap” that was almost inedible.

When it was time to leave to ocean, we stood for a while and just stared. The lacy skirts of the Pacific Ocean ruffled along the beaches, as though the grand lady Pacifica were gently perched on the Hawaiian Islands, her majestic blue skirts flowing around her. 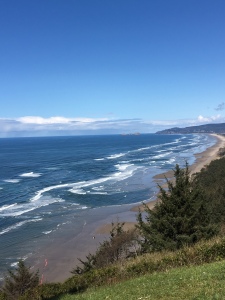 Back in Tillamook, Nelson decided he wanted some decent food. We stopped at the Dutch Mill Diner, which was a 50’s style diner in all the best ways. The black and white checkered floor tiles and red leather bar stools were visually satisfying. The music of my childhood sang out about how hard it was to be a teenager in love. And the whole place was run by extended family members. Youngest cousin Elijah made the wonderful milkshakes and his mentor cousin, whose name I didn’t catch, was our waitress. It was a delightful stop before we went to fetch Bridgett from the Comic Con and head back to Portland.

Back at our rental home, we had a simple dinner (I got to cook!) and slept. Tomorrow we work!!

And we did. We started pulling kitchen stuff from the many unpacked boxes so I could set up the kitchen like I want it before I head back to Salinas. It is a smaller kitchen so we are needing to be more selective. I think maybe our fourth and fifth cutting boards and five pounds of plastic containers may have to go by the wayside….but it is a small price to pay for such a nice place IN such a nice place. We made a lot of trips up and down all. Those. Stairs. 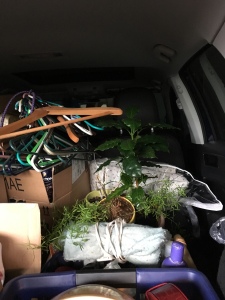 After dinner, we realized we were done for the day. We left boxes half packed and got into pajamas, and watched a documentary on people who raise chickens for shows. These were delightfully odd folks who dedicate their lives to breeding, raising, endlessly washing and showing their fancy breed chickens, such as silver lace Wyandottes and feather-leg Brahmas.

A wonderfully irrelevant way to drift off to sleep.