After a week of moving box after box of dishes, pots and pans to the new house, some nice strong fellows from West Coast Piano Movers came and carried our heaviest and oldest belonging down eight steps, into their truck, then up two flights of stairs to our new living room. They were very good sports about it, but man, is that thing heavy! It was a wedding present to Grandpa Nelson and me forty four years ago and has been following us around ever since. It was nice to sit down and bang out some Carole King in the new place. 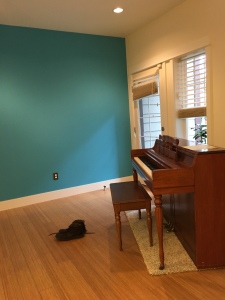 On Saturday, our newly ordered dishes came in, but were not nearly the quality we wanted and one even had a chip. So a trip to the most depressing mall in Portland, called Mall 205, was in order to return them without paying a shipping fee. Finding nothing even close to what we wanted, we found ourselves on a wild goose chase to the Washington Square Mall in the south west. Washington Square is all posh, all glitz. There is a Tesla dealership with cars gleaming like jewelry. There are Williams Sonoma, Macy’s, AND Pottery Barn. There are at least two stores that just sell make up. It was retail overload.

And because it was nearly noon and I was hungry, I freaked out a bit. I have only had a few anxiety attacks in my life, but malls are a definite trigger. Grandpa Nelson and Auntie Bridgett knew I needed to eat, so we went to the nearest restaurant, the Cheesecake Factory. In my hungry, panicky state it looked like Cesar’s Palace, a den of noisy overindulgence. But there was food and water and I felt better. We went back to Willams Sonoma, picked up the dishes, and headed home. Exhausted but victorious, we had a well deserved sit down.

Of course, this was also Easter and Passover weekend. We celebrated Passover Saturday night with leftovers from the Cheesecake Factory and a bottle of Don Chapin’s wine that we have been holding onto. Grandpa Nelson had his first taste of matzoh for the year and a blissful look settled into his face. We lit a mismatched pair of candles and blessed everything in sight.

And Sunday was Easter! I woke up early, cleared packing stuff off the table, and snipped some camellias from the bush outside. Auntie Bridgett, who usually does such a lovely job decorating, was not able to this year, but that’s no reason it shouldn’t be pretty. After a nice morning spent feeling blessed and happy, Auntie Bridgett listened to a live streaming of the church service from Twin Lakes Church in Aptos instead of going to a new church here. She will find a local church, I am sure…but not right now.

And of course, the flamingos celebrated in their yard. I head back to Salinas today and will miss Portland until June. See you then, kidlets.