This is my last letter to you until I get back to Portland! I am so excited about coming home, but sad to be leaving friends and family here in Salinas.

This week was a crazy combination of things that absolutely had to be done and things that were just filling time. There were lots of kids finishing their stories, me reading them, coloring, and just visiting with friends they won’t see over the summer. There were also games, which some of the kids got to lead. It was fun watching them take charge. 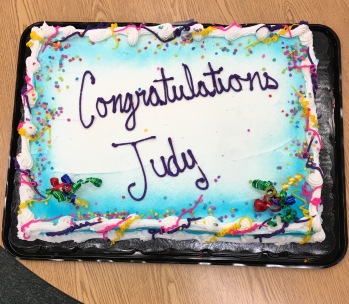 The Staff Meeting started with a Retirement cake for me and everyone telling Judy stories. They said such nice things! Mrs. Burgess, who I have known since your Momma Katie was 6, still teaches at University Park. We had a good time.

Then, all of a sudden, it was Friday! My last day of teaching! I still haven’t completely realized it, but there it was. I wanted to take a minute to reflect and get nostalgic, but again, there wasn’t time. As I was handing out report cards, Moms came to get their children “early”. It was five minutes early, but they just had to go right now. Announcements came over the system. Younger siblings invaded.

Once the children were dismissed, everything in the room had to be signed off and accounted for…computers, ipads, keys, emergency backpacks, remote controls, curriculum. Paperwork had to be shredded. Oy.

But finally it was done. My Pod buddies Heather, Leslie and Emma and I got a chance to sit in Leslie’s lovely backyard, having some really good cheese and beer and wine. We told stories and vented and just enjoyed being together. Then it was time for dinner at Taste of Thai with Auntie Olga, Uncle David, and Liza. Such good food in a pretty place.

Then home to bed and dream about flying north.