I love walking around Portland, and especially our Belmont neighborhood, looking for signs of the past. They are like layers in a painting or the growth rings of a tree, showing you what has come before.

One example of these signs are, literally, signs. Many of the tiled doorways that businesses laid down in the 1890s are still looking good, even when the original business has long gone.

The Pantorium, for example, was a dry goods store on Belmont in 1894. Since then the building has been more shops than I can count, including “It’s a Beautiful Pizza”, “Hall of Records” and currently, “Suzette”, home of sweet and savory crepes and delicious cocktails. But the tiled entryway still reminds us of what has come before in an elegant, useful way.

Other doorways graced by tiles show the permanence of cities. The Laurelview Apartments have been right here, renting space within sight of our beloved Laurelhurst Park since the turn of the century. Back then the park was fairly new, and the trees were just coming into their own.

Another way the tiled entrances show us the history of the city is by the addresses. As Portland grew, it incorporated smaller surrounding cities, which then became neighborhoods. St. John’s, East Portland, Albina, and others had their own street systems and addresses, which were carried over to their new status as as part of Portland, causing duplicate streets and addresses. This confusion was solved in The Great Renaming of the 1930s, which introduced an organized grid system. Numbered streets told you how far east or west of the Willamette you were, and north and south told you where you were in relation to Burnside Avenue. It was a few years’ work, but sure makes getting around town easier now!

The address of this shop used to be 1114 Hawthorne. After the renumbering, it became 3741 SE Hawthorne, which places it 37 blocks east of the Willamette, and south of Burnside Street. I am happy that all the owners in between have chosen to keep the old tiled entryway. 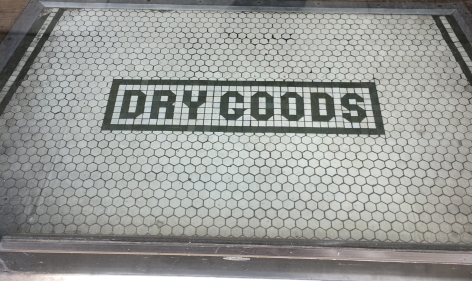