This afternoon Auntie Bridgett and I went for a walk to the Lone Fir Cemetery. We got sad news earlier this week, that the wonderful “Tour of Untimely Departures”, a rare night time, storied tour through our lovely pioneer cemetery, would not be held this year. It takes too much staff and too many resources. I am so glad we went last year or we would have missed it forever!

So we went to say hello to the dead people during the daytime. It was before dinner, and the sun was low, but still bright. I showed Auntie Bridgett where the sweet chestnut tree is, and while we were admiring the squirrels’ good work at cleaning out every single prickly shell, an elderly oriental man came by, gathering the horse chestnuts. He said they are good boiled or cooked over the grill, but I am still not convinced.

We wandered around, appreciating the stories the headstones tell. The art and symbols, some over 100 years old, are beautiful even in decay. Weeping willows show peaceful rest, a drape over a stone urn shows separation between the living and the dead. Clasped hands mean a final farewell.

There was a stone showing a couple, Doll and Elton Mack Phillips, with a charming line drawing of them between their names, with their “sunrise” and “sunset” dates. I would have liked to have known them, I think. They look like fun.

We saw a long narrow stone that had been there so long the letters were perfectly filled in with moss, but no dates or details. Just “Smallbone”. That will take some researching.

We saw the headstone of Victor Hugo O’Rourke, a cook in the 65th Regiment of the Coast Artillery Corps. He died in 1918. His name makes me think his mother was a French Literature teacher and his father an Irishman. But my imagination sometimes runs away with me. 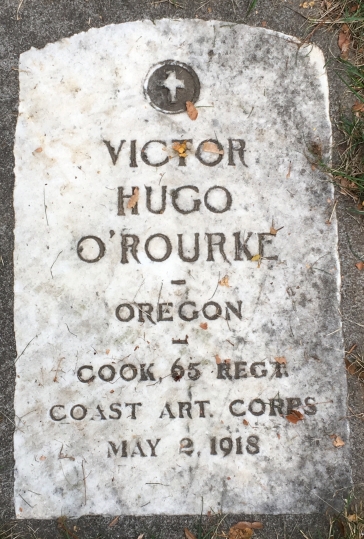 And then this bronze marker caught our eye because it was so detailed and crowded with symbols. Mr. William Scott died in 1901 at the age of 46. According to his bronze marker, he was a Knight Templar. But the Knights Templar went inactive after most of them were massacred by Pope Clement V in 1312. On the other side of the marker was a large anchor and rope with a shield and the letters. A.O.U.W., which stand for The Ancient Order of United Workmen, a branch of the Masonic Organization. This man obviously had a full life and a community that must have mourned his passing. 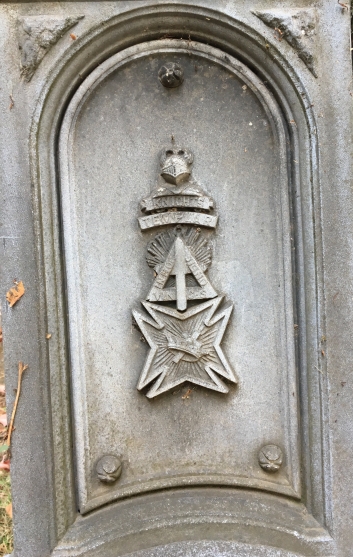 As always, we came away from Lone Fir rested and with a sense of perspective that sometimes gets lost while staring at screens in research or learning to use new equipment. Knowing that we all will go someday allows us to see each day as a gift rather than a chore.