After we had finished our dinner downstairs at the Oregon Public House, we went upstairs to The Village Ballroom. This is a large open space with a lovely old wooden dance floor and small stage, which was used as a grange hall in the 1920s. We were there to see and hear the Ne Plus Ultra Jass Orchestra.

If this name sounds familiar, it’s because we went to the Clinton Theater before Halloween to hear this same group perform spooky, silly tunes from the early part of the 20th century. They specialize in vintage band music and are a joy to behold. The Village Ballroom is their home turf, where they have played show every month for two years. In keeping with the charitable intent of the Oregon Public House, half of the money from every show goes toward local charities.

Playing with them last night was Jennie Spada playing something you almost never see, a Theramin. This is an instrument that was invented by Leon Theramin in 1928, and relies on radio waves. You don’t touch it to play, but hold your hands just right, and the distance between your hands and the antennae creates interference which makes the eerie, science fiction-y sound. Jennie played with the band on a few tunes, and it was fascinating to watch, but clearly not what the Theramin was designed to do.

Samuel Murray Hawkins, as band leader and vocalist, was charming as ever, wearing a top hat and tails. The 10 piece orchestra all did very well at such tunes as “Louisiana Lullaby” and Duke Ellington songs like “Black and Tan Fantasy”, “The Mooch”, and “Black Beauty. ” Hawkins’s favorite novelty song, “Don’t Bring Lulu” was funny and delightful, telling all the mischief a young lady gets into and advising boys not to invite her along…then says that the singer will bring her himself.

At our table by the dance floor was Lily, the young lady we met at the Halloween concert, and some of her friends. Except for joining in the conga line, none of us got up to dance during the evening, but many other folks did!

It was so much fun watching young, nimble footed couples dance by elderly pairs who had been obviously been dancing together for decades. The dance floor had room for about 14 couples, and for many songs, it was quite full. 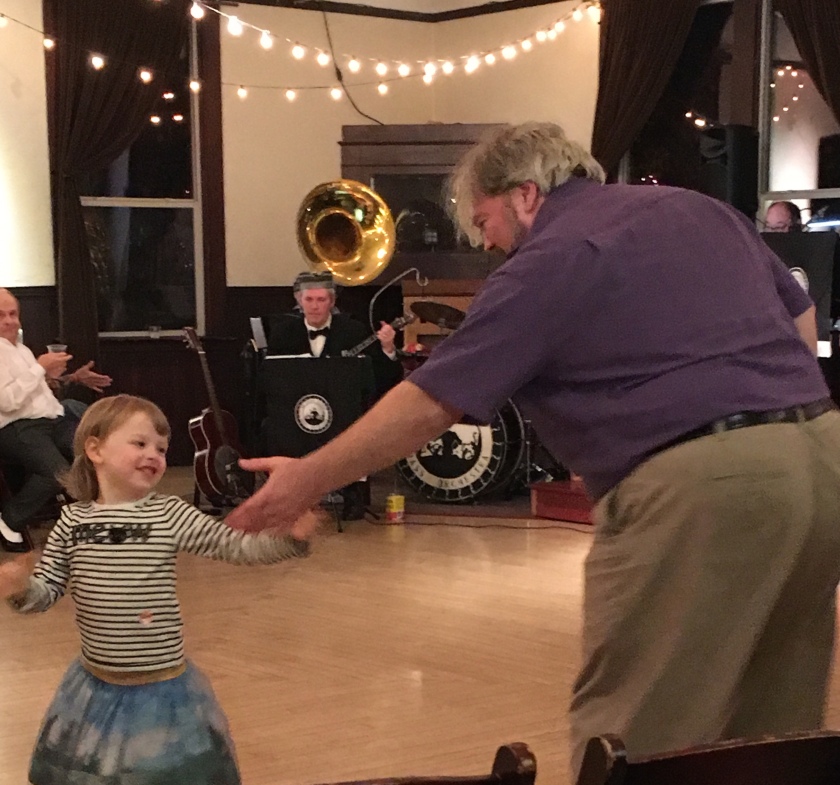 The couple that caught my attention, though, was a man and his grand daughter, who was about five years old. Their contrasting sizes were no impediment to their fun, with Grandpa swooping to lift her up into a swing, or spinning her gently by the hand. The little one was a good sport, too, remembering where the other dancers were so as not to trip anyone up.

After 2 hour-long sets and an encore, the band was tired and so were we. Grandpa Nelson called for a Lyft car and we were home and in pajamas by ten o’clock. What a fun evening!