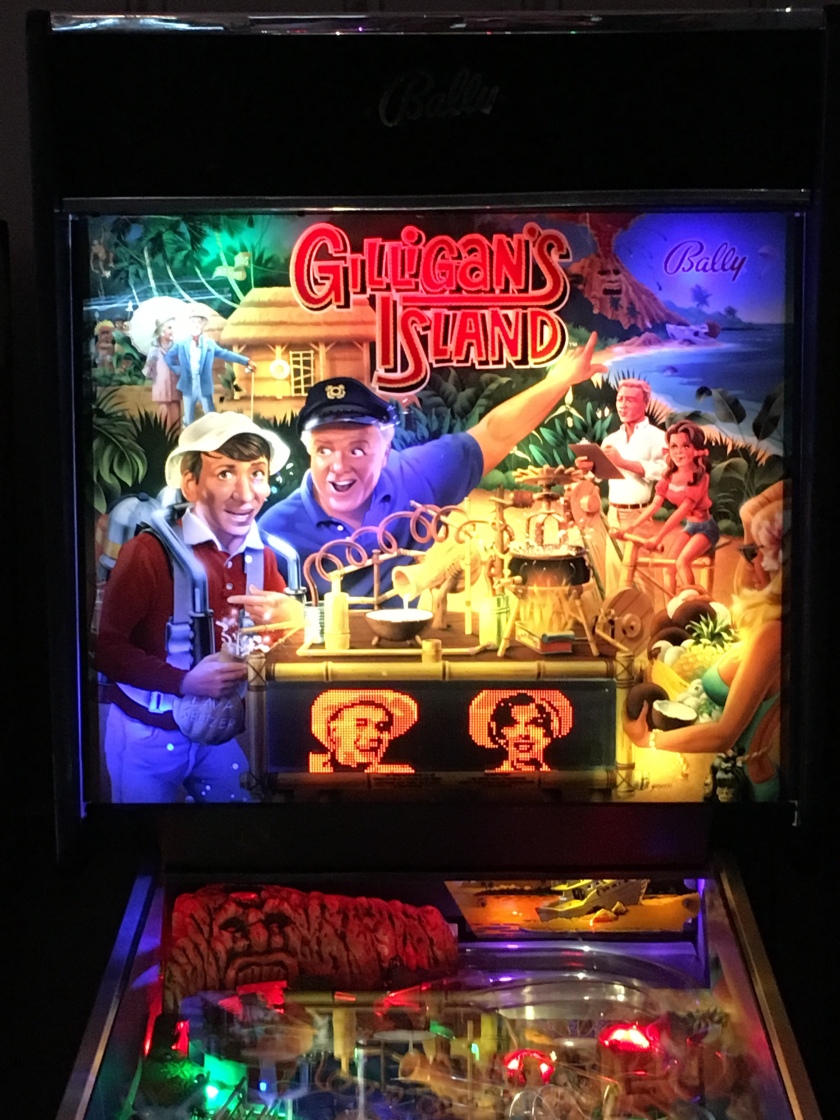 You know I love playing pinball! I played in college, then when your Daddy David was a little boy, and now here in Portland. We have our favorite game, Monster Bash, at our local tavern called Belmont’s Inn. We even discovered a new game there called The Beatles! And you know I love them.

We had heard about Quarterworld before, but this past weekend at the Rose Festival Midway, we were reminded, and today Grandpa Nelson and I had a long walk there.

We headed off late, because the place doesn’t open until three o’clock, and admission just a dollar from three until six. On the way we got hungry, so we stopped at a new hamburger place for fries and milkshakes. 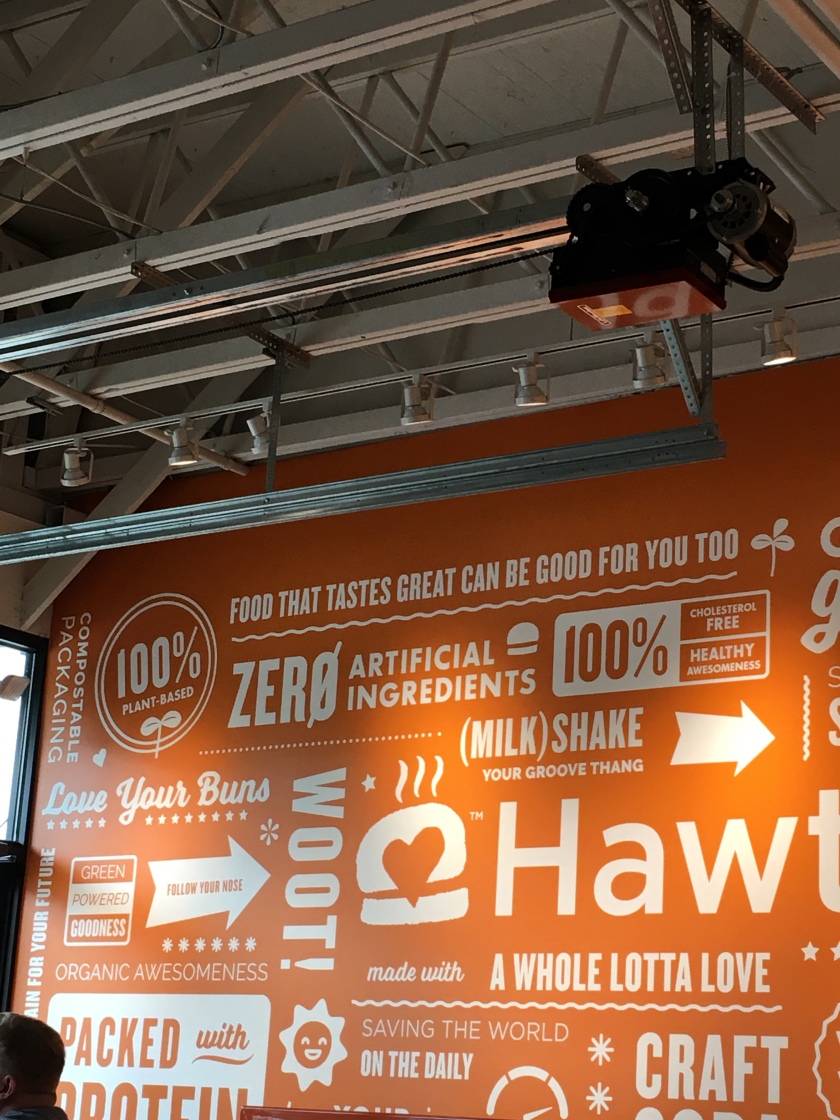 Next Level Burger is clean, cheerful….and VEGAN. We were half way through ordering before we figured it out, since we hadn’t read the GIANT signs on the wall. We tried “milk” shakes and real French fries. The shakes, though made with soy and whatever else ( they don’t post an ingredient list, even on their website) were rich and very tasty. The fries were okay, but had paprika on them! Grandpa Nelson let me eat them.

After finishing our unconventional treats, we headed east down Hawthorne Street. We stopped at Zack’s Shack, where we got some GOOD fries for poor Grandpa Nelson, then finished our walk …and entered Quarterworld.

The 1913 building was originally a vaudeville, then movie, theater. The ticket booth is just inside the door, just like it has been for 106 years. The carpet has been there … well, not a hundred years, but way too long…. it has that sour what-the -heck -has-been-spilled-on- this smell, which did not make a good impression.

We paid our dollar admission and were told there would be a Tesla Coil Show, warned that it reached 90 decibels, and were offered free ear plugs. I accepted them. 90 decibels is as loud as a home stereo can get, or a lawn mower. Too loud to be enjoyable.

There were over 30 games in the largest room, old pinball and newer video games. I played The Beatles game, and then Bullwinkle, after Grandpa Nelson had a chance at it. Both were fun, fast, had good long play times, and lots of fun audio and eye candy. 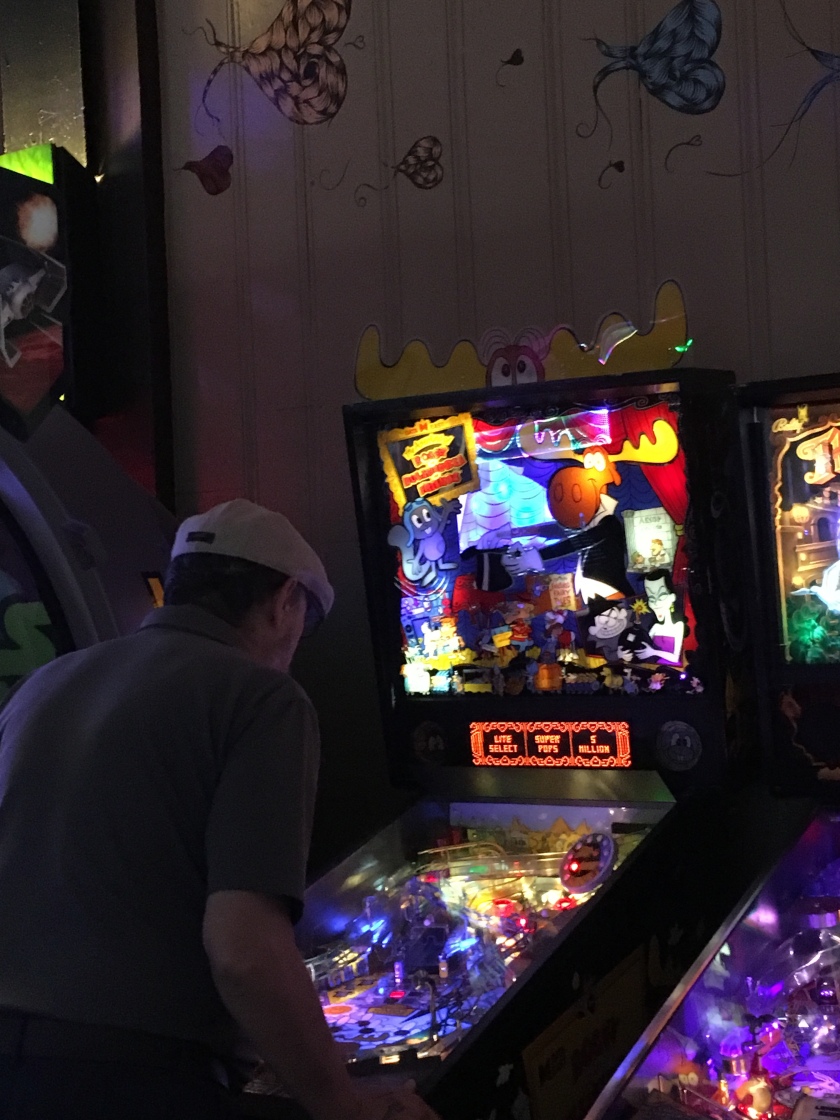 Then came the Show. In a caged-off area was a Tesla coil ( a huge electric conductor) which sparked impressively while playing EXTREMELY loud music…the theme from The Muppet Show, Indigo Girls’ songs…. but I couldn’t stay. Even with the plugs and my fingers in my ears, it was painful.

I went exploring. Across the hall (and away from the noise) I found a smaller room with more games, a bar, and some interesting art on the walls.

In the hall on the way out, I decided to try an old friend, PacMan. My fifty cents bought me about 15 seconds of joy, then my little Blinky died and I was done.

We were both done. The noise from the Tesla Coil had rattled Grandpa Nelson’s nerves, so we walked up to a quiet street and headed home for a restful afternoon. Now that I have experienced Quarterworld, I don’t need to go back. For a while, anyway.

On the way home we read this message from a neighborhood youngster…I couldn’t agree more. 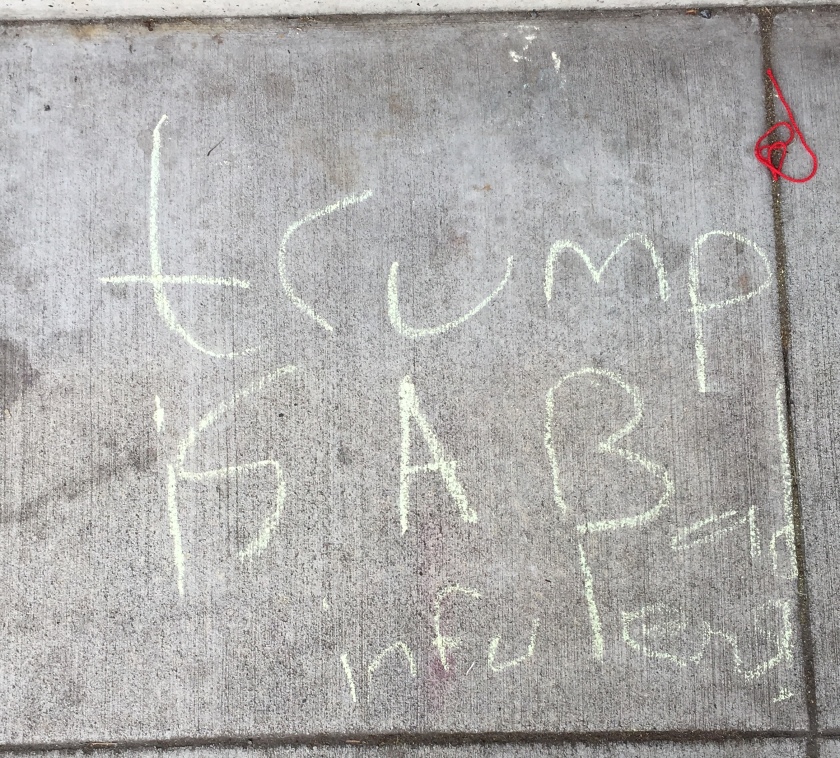