We had such a wonderful Fourth of July! 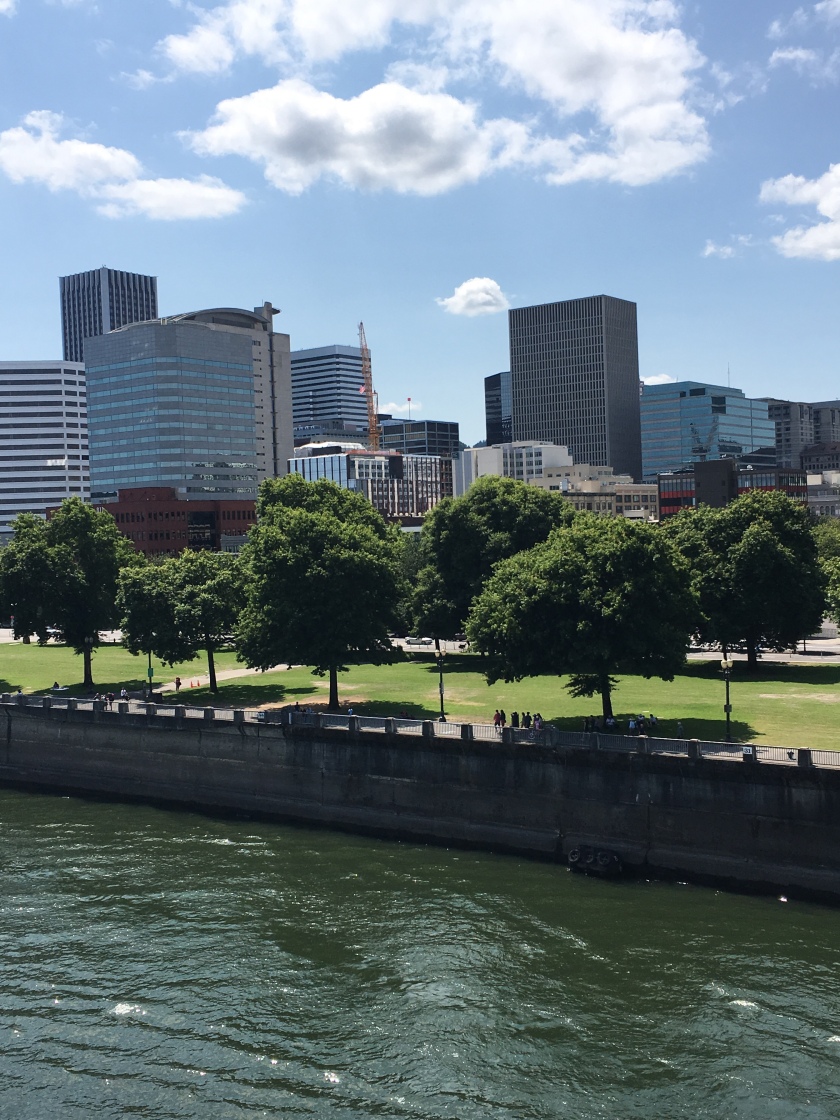 We took the bus downtown and walked north. Both the car and pedestrian traffic were very light because of the holiday, so it was quieter than usual. The sun and clouds reflected in the newer glass buildings, while the details on the older ones showed up like vertical sculptures. 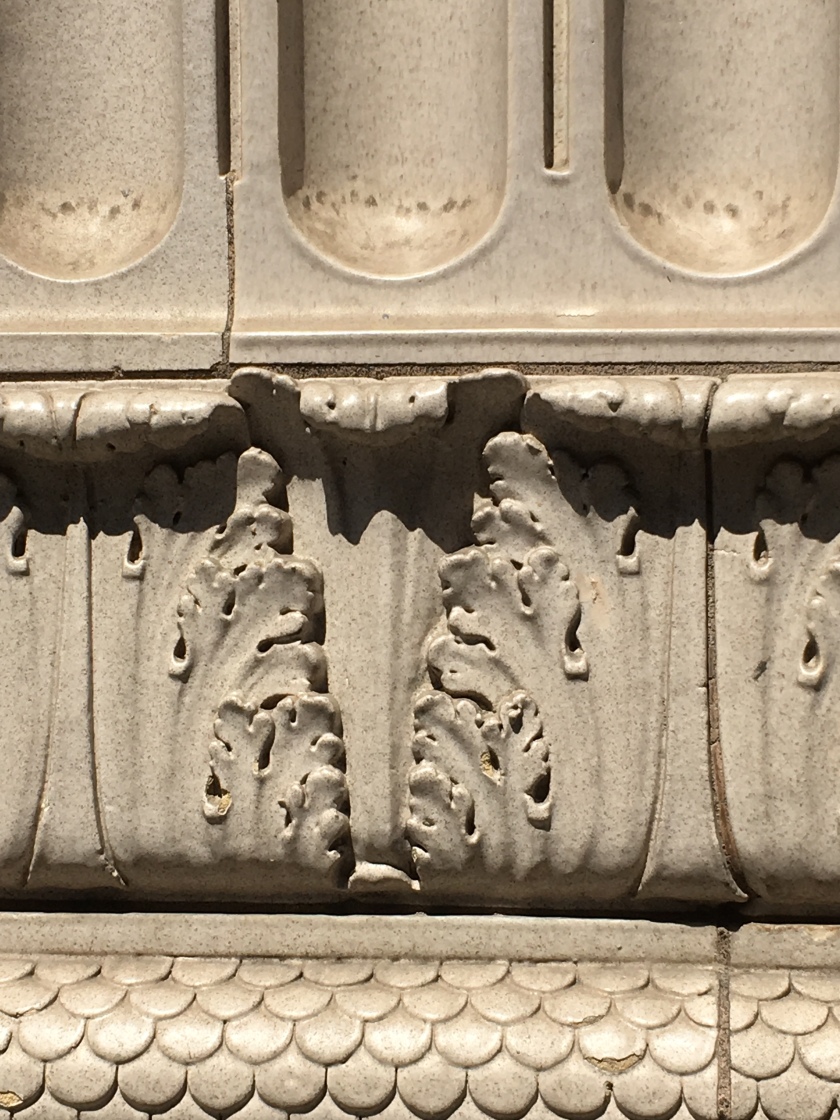 We had lunch at Kenny and Zukes, our favorite deli, and watched the world walk by the big windows. Fortunately, we got there just ahead of the lunch rush! 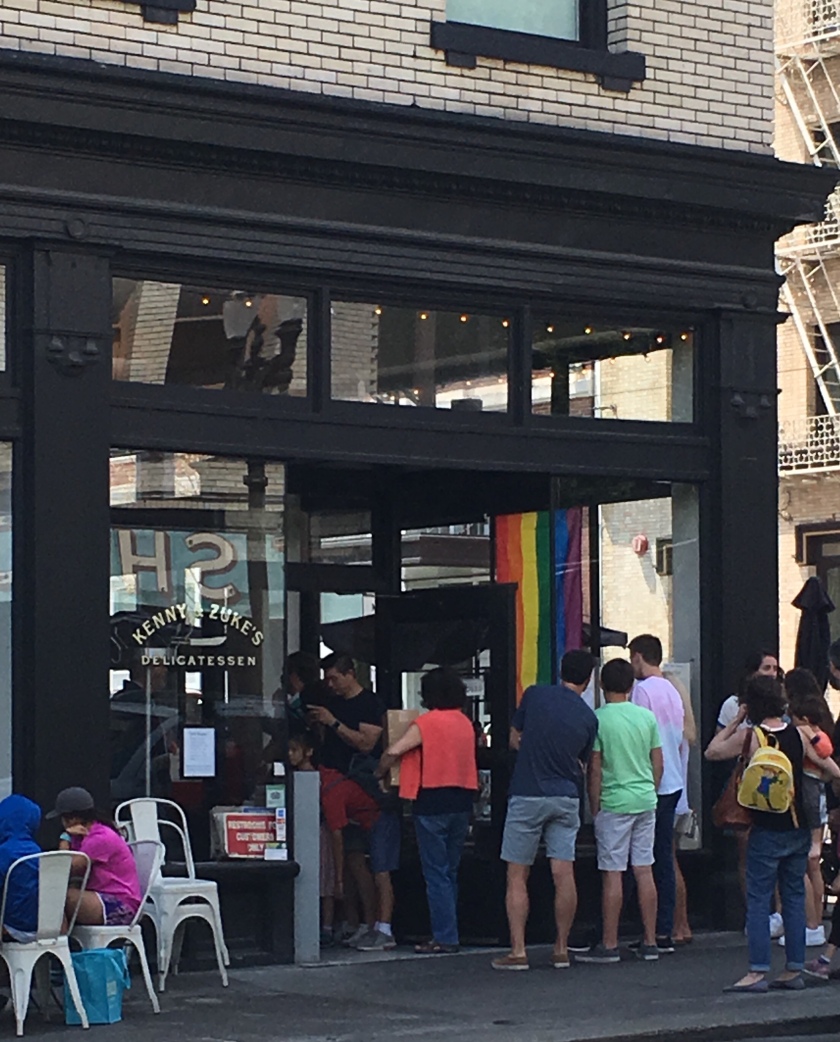 Bridgett had found a new French patisserie on Oak, just a block down from the deli. They were closed, but we looked in the window. It looks tiny and charming…. and delicious! We will be back. 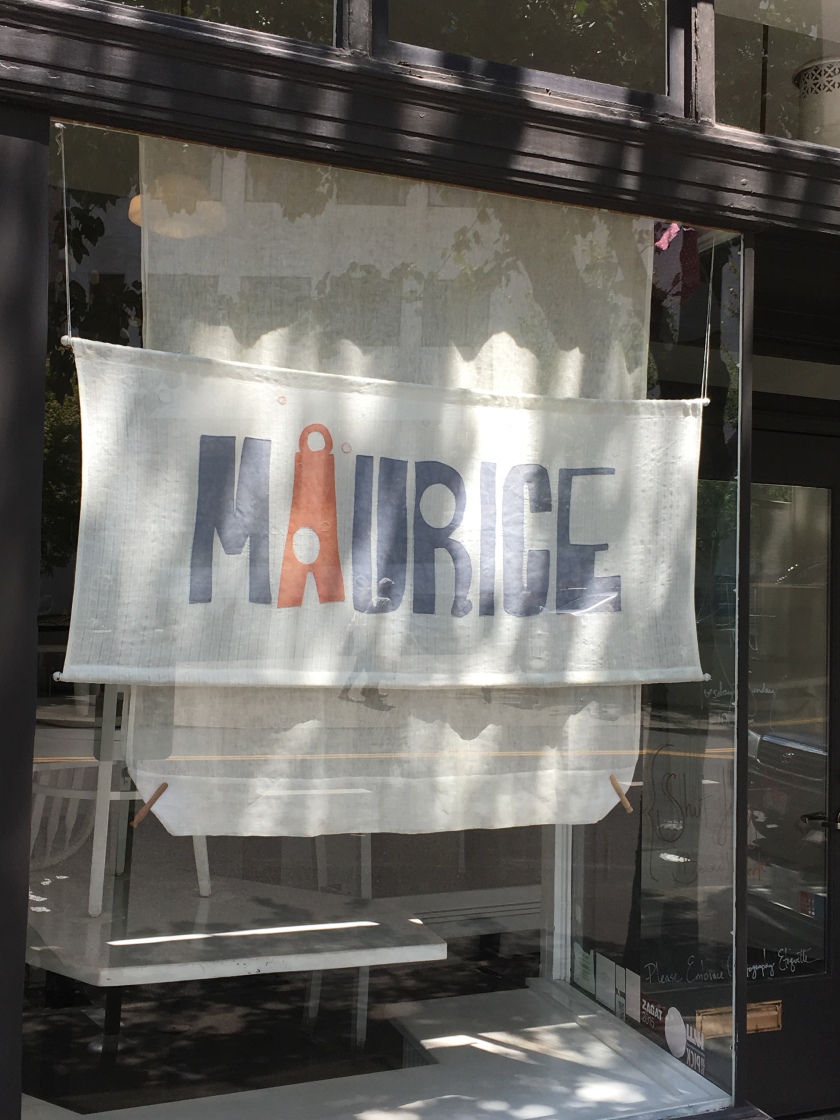 We spent a happy hour in Powell’s City of Books, hunting gifts and just browsing. I found things that allowed me to celebrate our nation’s birthday. Red, white, and blue stars in the book stacks! 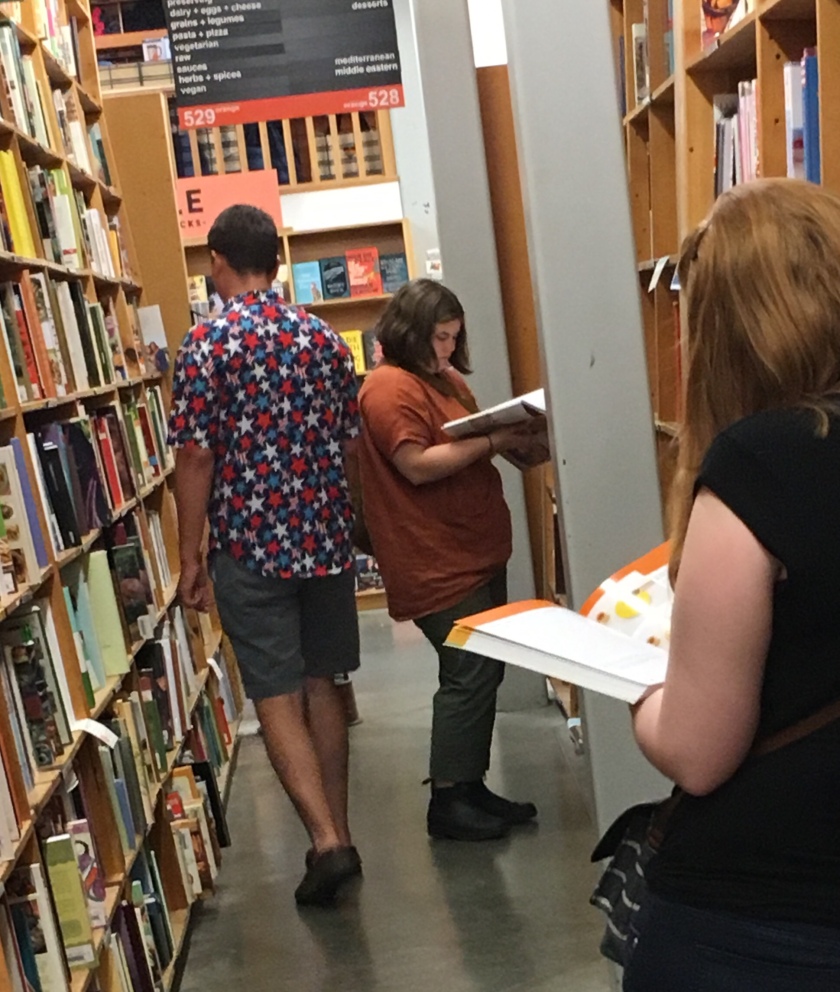 I found this memorial to Miriam Sontz, who was a CEO of the bookshop for thirty years, apparently. it is imbedded into a cement ramp in the store. I’ve walked over it dozens of times and finally stopped to look! 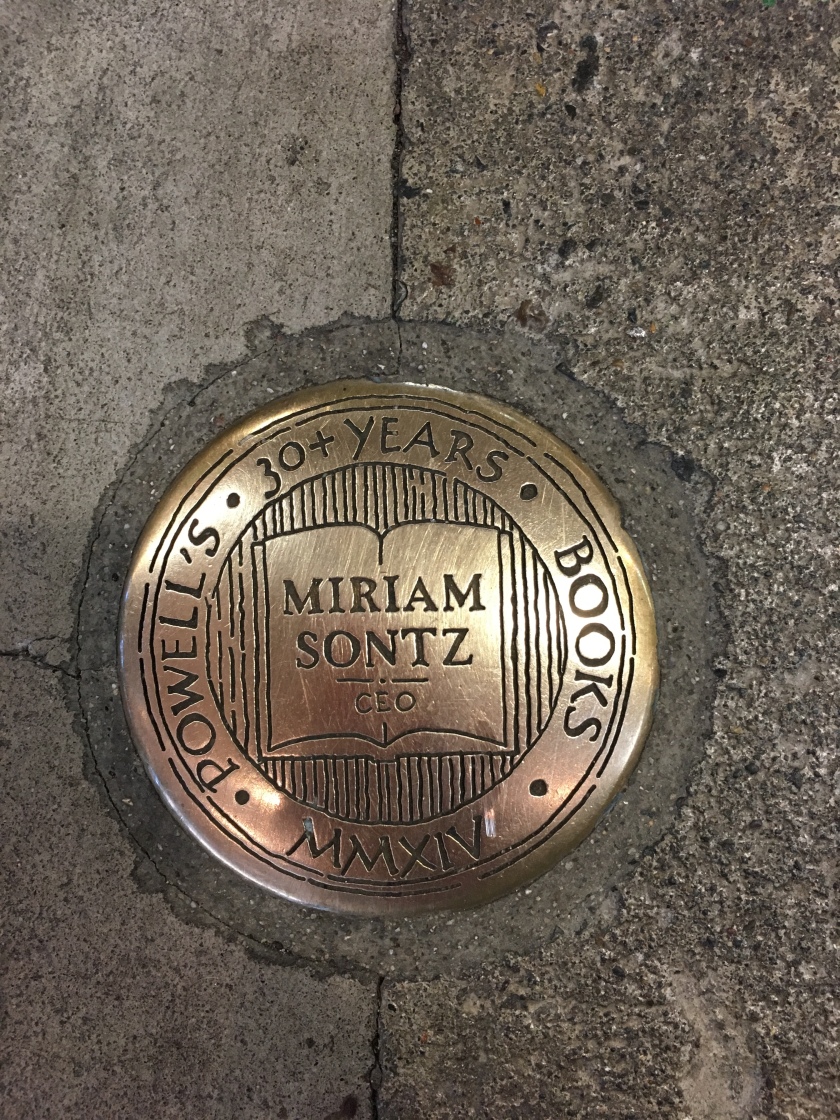 As we walked around, Grandpa Nelson suggested we walk across the Willamette, instead of taking a bus, on our way home. I was happy he was feeling up to the walk and we all agreed. We navigated through the Pearl district and in to downtown and caught the Morrison Bridge. The views of the river, the blues festival and all the activity there was amazing. We found this memorial to two folks who died in car/ pedestrian crashes on the bridge. I imagine their deaths urged the city to make the bridges safer, and for this, I am grateful. 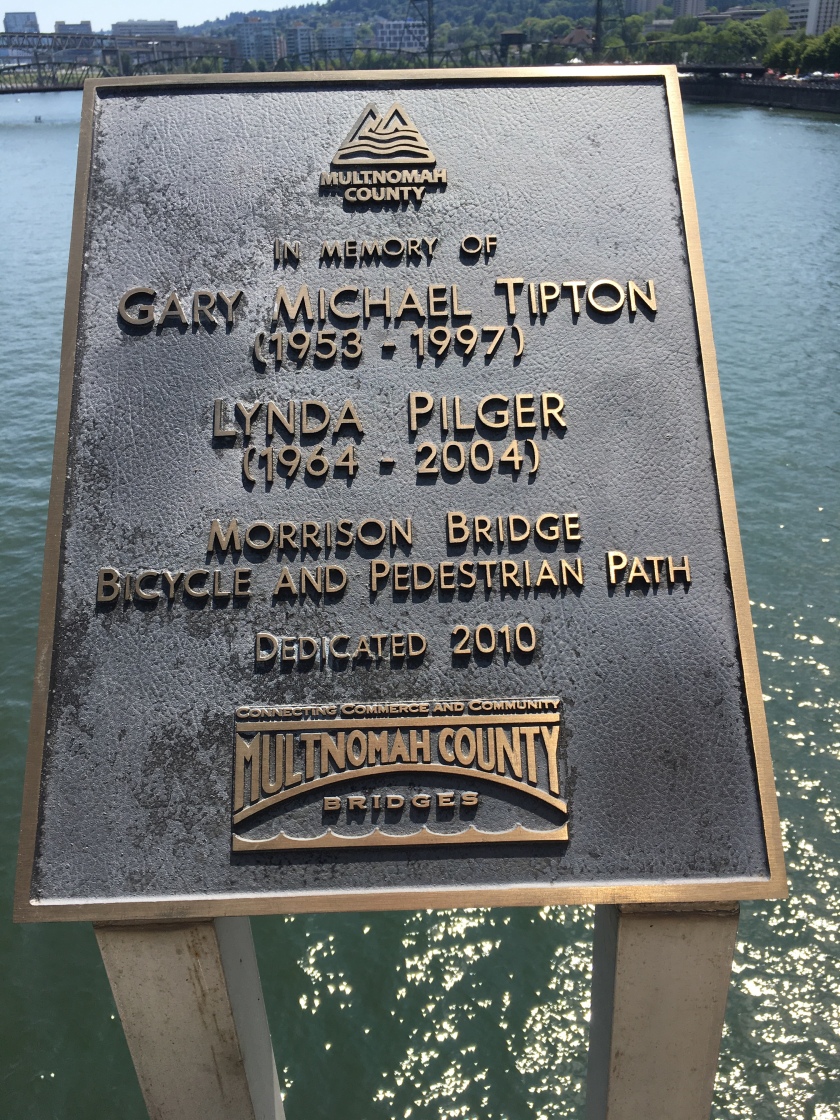 Once on the east side, we started getting warm. We walked through the warehouse house area by the river and up the hill, getting thirstier all the time. We stopped in the shade to rest and found these plaques to Abigail Scott Duniway, a suffragist, and Esther Clayton Lovejoy, who was the first woman doctor on the city board of health. These women made life better for everyone in Portland. 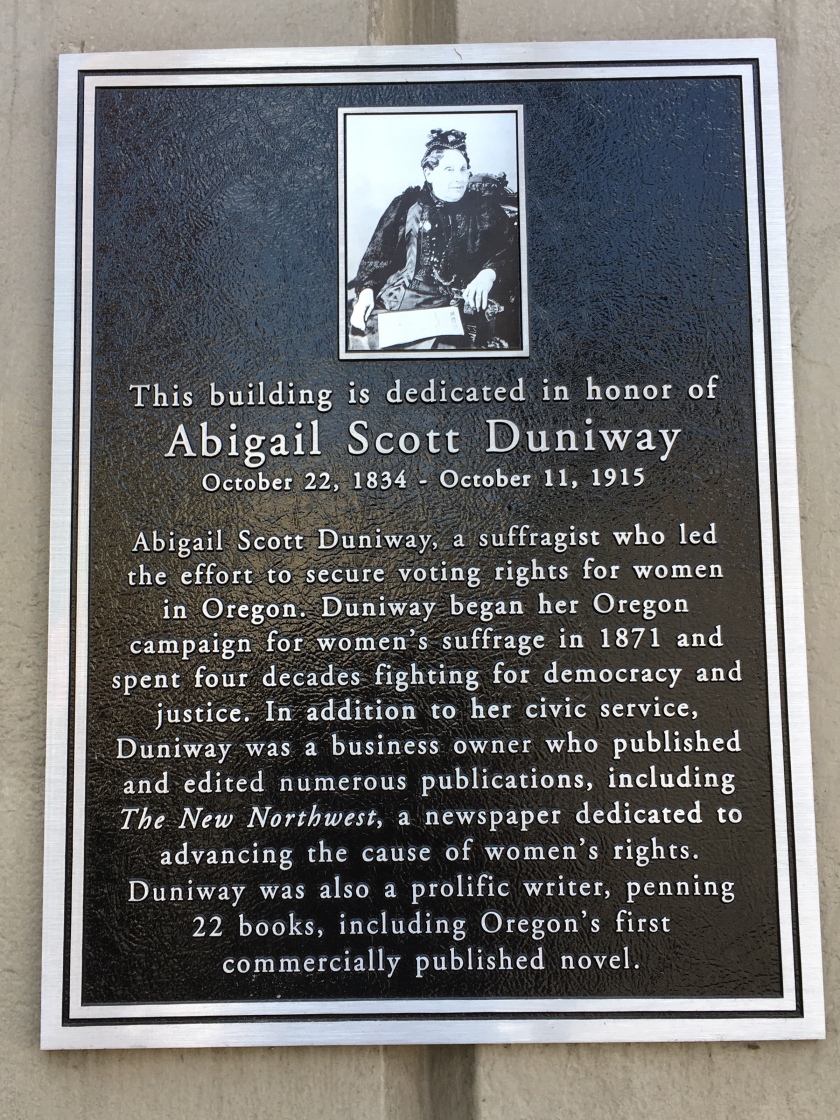 Just a little further along, under the Morrison Bridge, we found the old cobblestones from a hundred years ago, peeking out from under the asphalt! I was so pleased to have history right under my feet! 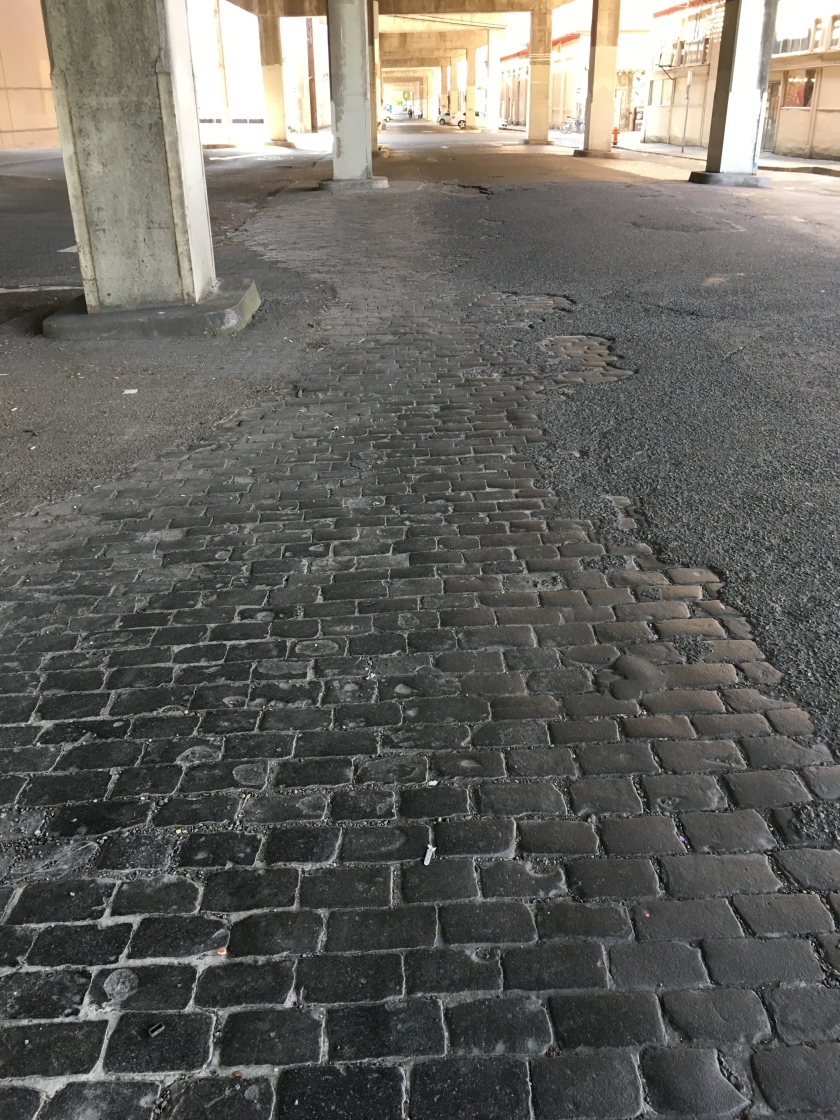 Being a planner, Grandpa Nelson had a destination: the Crush bar! Cool and comfy, serving drinks with lots of ice, the Crush was just what we needed. A tall gin and tonic, creamsicle, and an absinthe in the rocks cooled us down and made the world rosy again.

We finished our walk home and had some well deserved downtime. 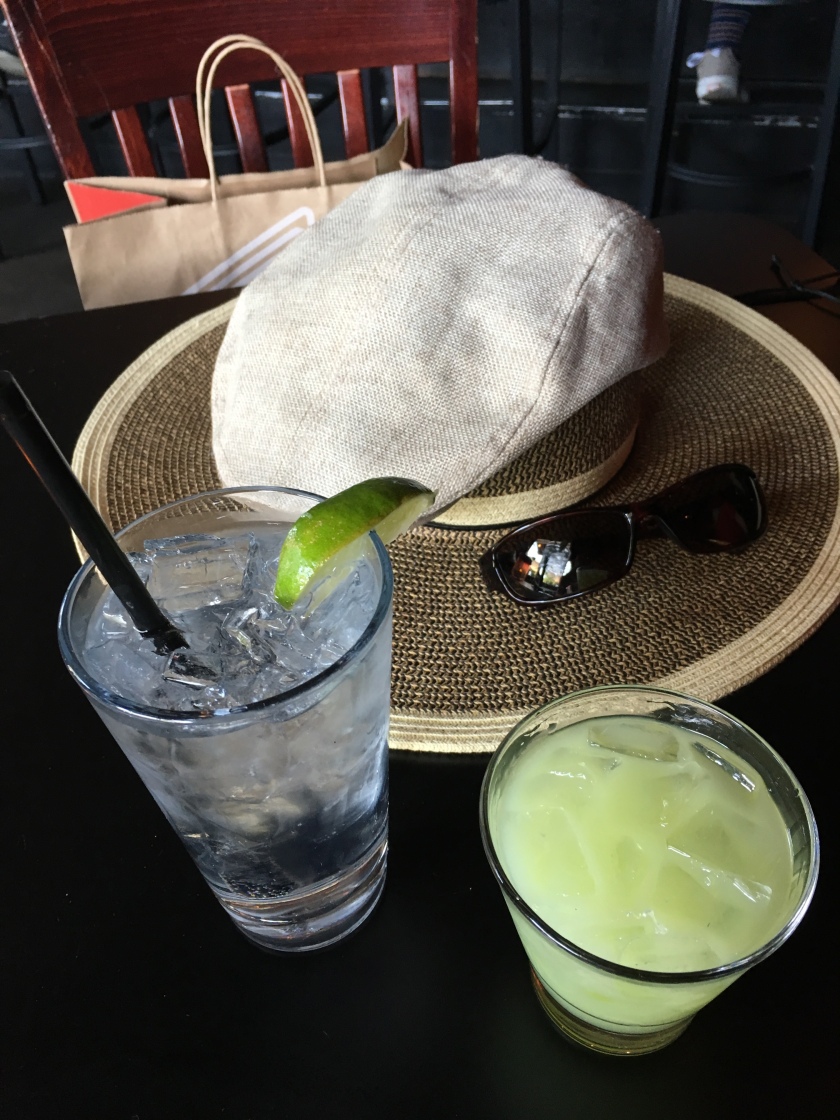 Around five o’clock, we had revived enough to pack a picnic and head to the park…no concert today, but a Fourth of July Picnic seemed in order. We settled in and watched the theater of life…. lovers smooching on blankets, parents chasing children, kids and adults playing the newly painted piano… all the coming and going was life affirming.

We even played frisbee, only bonking folks on blankets two times. They were very good sports, actually. We got pretty good! 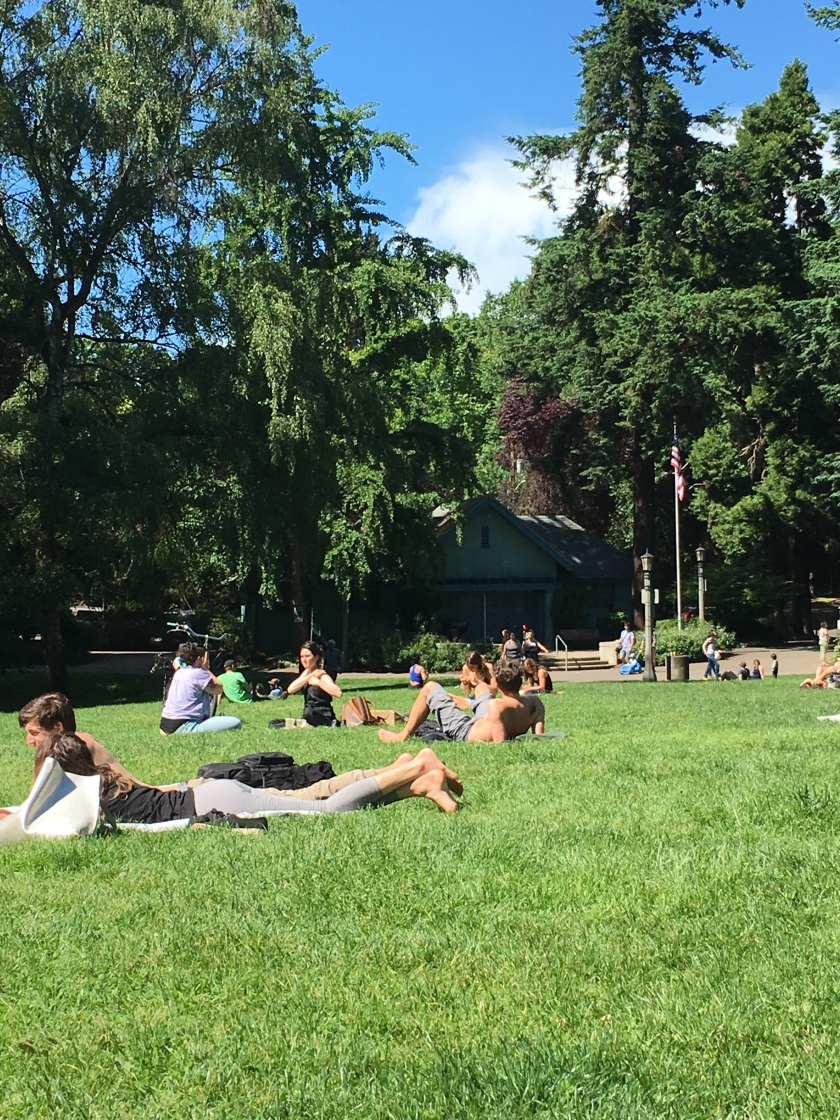 Eventually the sun went down and we got cool, so we headed home and watched James Cagney in “Yankee Doodle Dandy,” our holiday tradition.