The grey has settled in pretty well today, a slow solid rain. Lucky for me, I have hot soup, fresh bread and music, and writing to you, to keep me company.

Now that almost all of the leaves are down, I am noticing the houses more. In summer, it sometimes felt like the houses were being eaten by their landscaping! 100 year old trees, bushes, fruit trees and annual bulbs exploded and covered everything with a heavy swath of green.

But with the leaves, even the brilliant yellow ones, gone, the houses are emerging to be appreciated in their own right. Lovely pointy Victorians, square and true Craftsmans, even mid-century bungalows are coming into their own. It allows me to see the yards and shape of the houses and wonder which type of yard and house we will move into!

After a nice walk out, Grandpa Nelson and I met Auntie Katie and cousins Jasper and Kestrel at The Lego Minifigs place I told you about during the summer. We were there to have the kids choose a bag of Legos each as their gifts for Jasper ‘s birthday.

Actually, we offered Jasper two bags and he said Kestrel should get one of his.

I love that boy!

After an hour of hard choosing, including Auntie Katie finding a great book with design information and advice for the budding lego-engineer, we headed over to Blackbird Pizza for dinner and pinball. This nifty place is on the corner of 20th and Hawthorne, right next door to Dr. Locke’s House that I wrote about the other day, so Grandpa Nelson got to see the stepping stone.

Off to bed and dream of coming to see you!

This morning we woke up to another very sunny day. I know that this winter it will be dark and rainy, so I am appreciating the sunshine. I just keep drinking nice cold water.

Grandpa Nelson, Auntie Bridgett and I drove (it was only about 2 miles, but it was hot already and we would be carrying groceries back) north to a neighborhood called Hollywood. This is a very pretty area with older houses and beautiful, shady trees. There are funny shops like the “Do-it-Yourself Pet Laundry ” and “The Wet Spot–Your Place for Tropical Fish”.

We were there to buy fruits and vegetables at the Farmer’s Market, at NE 44th and Hancock, just off Sandy Street. In the land around Portland are farms that raise all sorts of fruits and vegetables. There are Farmer’s Markets in lots of neighborhoods on Saturdays.  Whatever is ready to eat, you can find it. The market was in the parking lot of a big supermarket, and the pavement was painted with crazy fruits and flowers.

After walking all around the market we bought a little bit of lots of things: 10 fava beans, a small basket of blueberries, 6 tiny yellow squash, a rosemary plant in a pot (you know you need that for roasted vegetables) , some basil, and a small sausage.

There was also music by two people playing a drum and a cello, but it sounded different from any music I have ever heard. They called themselves Gaeasoul and I want to hear more of them! 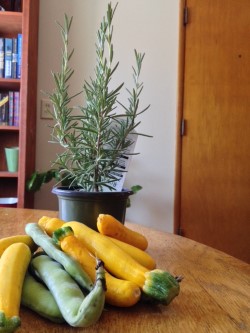 Some of what we bought

Then we realized we were hungry, so we walked down Sandy Street to Laughing Planet, a place for burritos, bowls, and sandwiches. It is delicious and fun, too. There are about 30 toy dinosaurs you can just pick up and play with, then put back when you are done. There is also a giant painting of Godzilla and Robbie the Robot on the wall.

As we were walking around the neighborhood we saw a shop called “Bricks & Minifigs”…. it is a shop where you can buy legos! Not in a kit or in a box, but

just the pieces you want! It was amazing, like legos had escaped and were playing by themselves. There were also armies of Lego figures, all lined up. I will take you there and we will pick some interesting bricks.

By 1:00, it was time to drive Auntie Bridgett way east to Division Street and 84, to the Zine Symposium, a place where people who make small magazines get together to share and talk. She will take the #4 bus back when she is done. I hope the bus is air conditioned.