You and I have talked about Mr. John Steinbeck, how he was born in Salinas, lived a long and busy life, and then died, and is buried in the Garden of Memories. Knowing that there was a big part of the world that happened before us, and will be a long time after us, lets us see ourselves as a piece of the world.

This month at Barbara Kadden’s funeral, Death was right there with us, by her grave under the bright maple trees. It wasn’t dressed in a long black cloak, but silently standing up from its usual crouch in the dark corners of our minds, letting us see it clearly for a few hours.

And now it is Halloween, and pretend-Death is all around. Bony hands reach up from make believe graves in flower beds and grim reapers swing on sunny porches. They seem to say “See? It’s really okay. It’s all in fun.”

But the peaceful dead at Lone Fir, Home of Peace, Garden of Memories, and River View Cemeteries disagree. “Not in fun,” they say. “We really lived. Some of us for only a few months, some for over a hundred years, and then we died. Those we loved mourned us. It is not fun, but what is.”

I think people love Halloween because it lets us toy with Death. The Great Mystery becomes a costume to wear or a movie to watch, to make it small enough so it can be thought about safely. It is a way of thinking about the unthinkable.

And I’m okay with that.

After Liza and I left the Garden of Memories, we walked down Romie Lane. Romie is a busy street with lots of doctor’s offices, because it is right near Salinas Valley Memorial Hospital. Liza and I have both been to the hospital a few times. I went with Great-Grandma Billie years ago when she got hurt, and their Emergency Room gave Liza stitches in her forehead and me stitches in my lip. Auntie Olga even gave birth to Liza in that hospital! They have taken good care of our family.

We discovered some interesting things along the road. Liza found moss, like the kind I miss in Portland, under some bushes. Because of the recent rains, the moss was soft and green. It was lovely.

We kept walking and got to Claremont Manor Park, which is right next door to Monterey Park School. This is a park with trees that are good for climbing, small and large play structures, and even a baseball field right next door. Liza found some kids to play with and I sat in the sun and relaxed.

I ran into a friend who used to work at my school, Krysta Bradley, and her family, including their youngest son and new puppy.  He is a very soft golden retriever and very friendly. Their oldest boy, Mikey, was playing baseball at the park.

Liza found a tree to climb that was just the right size. As she was busy climbing with some new friends, Krysta told me that when SHE was a little girl, SHE climbed that same tree! That has been a happy tree for many years! Liza and her new friends made up a game that they were monkeys and were growing banana trees. “The more trees we grow, the more bananas we can eat!” they chanted. “We are monkeys!”

Leaving the park, we continued down Romie Lane. We found a little boy and his tiny puppy, going for a short visit on the sidewalk. Then we got to Main Street, and the MYO Frozen Yogurt Shop! What good fortune, a cool snack and place to sit, right next to a bus stop. We snacked and met a student of mine, Brandon, who had just finished bowling at Valley Center Bowl next door. Then we stepped out the door and, after a while, caught the number 23 bus downtown where we transferred to the number 20 which took us just a block from home.

Boy, was I ready for a nap! I think I fell asleep before Liza did. What a fun day!

Over the weekend, Liza and I had another adventure. We visited thousands of people… but we were all alone. It was windy and chilly when Uncle David dropped us of at the corner of Abbott and Romie Lane, where the Garden of Memories Cemetery has been since the city began, more than 150 years ago. Liza had wanted to see where her historical friends,  John Steinbeck and the Harvey family, were buried.

I like cemeteries. I like the Lone Fir, which is near our house in Portland, and I like the Garden of Memories. The two are about the same age, with burials from the 1840s, which means they both have some tombstones you can’t read because of the letters wearing off. 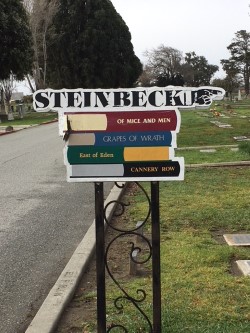 First we walked until we found a big, new sign showing us the way to John Steinbeck’s grave. He is so famous, people come from all over the world to visit him here. John is buried in the Hamilton family plot, along with his father and mother, his sister Mary, and his wife Elaine. We had forgotten to bring flowers, but Liza found some that had blown onto the road, and she placed them on the Hamilton headstone. We talked about Mr. Steinbeck and the books he wrote, his library and “newseum”, as she calls it.

Then we walked toward the old apple tree which, for me, marks the Harvey family area. Isaac J. Harvey and his wife Sarah, two of their children and many grandchildren, are here. We talked about the family, with young Mabel being Liza’s favorite. We found Mabel’s big sister, Saphronia, who was the first school teacher in Salinas, and the grave of Saphronia’s little baby Rupert, who died when he was only five months old. The idea that babies could die was new to Liza, and she did some thinking about it while stomping on piles of dirt that some gophers had pushed up.

The wind was very chilly and we needed to find a sheltered place to have our snack. The Columbarium, a building where the ashes of people who were cremated are put in small niches, was a perfect place. Not dark or scary at all, it has big painted windows and is bright and beautiful, with comfortable chairs. We enjoyed our yogurt, crackers and apples while reading memorials to the people.

The sun came out while we were resting, and we ventured out to a small courtyard with more niches and a small fountain. Behind that we found the memorial to Company C, 194th Tank Battalion, a group of soldiers mostly from Salinas who were in the Army during World War II. They served in the Philippines, and 105 of them died there, on what is called The Bataan Death March. The tank and plaque with all their names on it is their marker.

We visited the Jewish section of the cemetery to see some old friends of mine, like Max Gadsky and Sue Dove, as well as people I know only by reputation, like Rabbi Abraham Haselkorn, who was the leader of the Jewish community here in Salinas for many years.

We had more places to see, so we said goodbye to all the nice dead people and headed west on Romie Lane. I’ll tell you where we went next tomorrow!