Last night, we walked to the Belmont Library to listen to local historian Tanya March, Ph.D, talk about “Ghosts, Criminals and Murders in Slabtown”. It being the Halloween season, the subject matter seemed fitting, and I am always looking for more Portland history.

The meeting room for the talk was decorated with a wonderful quilt made in 1988 to celebrate the centennial of the Sunnyside neighborhood, with embroidered squares showing local landmarks like the library itself and The Avalon, the neighborhood theater. It was a work of love, friendship, and considerable skill.

We were early for the talk, so got to visit with Tanya. She is a very energetic young woman who digs into history and ties it to current projects, like protecting old buildings or neighborhoods because of their history. I love that she uses her academia for social good.

Her rapid-fire talk, which included very helpful slides, ranged from stories of murders and hauntings in northwest Portland (called “Slabtown” because of the early use of slabwood for stoves) to the KKK, to reputing the tales of Shanghai Tunnels. She covered so much ground that I thought I would trip over my brain trying to take notes fast enough!

Most interesting to me, however, was her mention of Mrs. Nina Larowe, who I had just learned about that morning while researching activities for the kids in my story.  Born in 1838, Mrs. Larowe had been a well-to-do lady and actress in New York, and had traveled to The Holy Land on the ship that Mark Twain wrote about in his book “The Innocents Abroad”.

According to Tanya, Twain wrote about Mrs. Larowe as one of the Pilgrims who would break into tombs and take ancient religious relics, then carelessly throw the precious artifacts overboard when their suitcases got full. This damaged her reputation in New York, she got divorced, and moved to Portland for a fresh start. Mrs. Larowe came to Portland in 1888 at the age of 50. She used her knowledge of the theater to open a dance hall called The Esquire, where she taught dancing, gymnastics, and elocution (public speaking).

Tanya included Mrs. Larowe in her talk because of her “criminal” status for defacing ancient tombs, but the lady was successful here in Portland, dying at the age of 83 and remembered in her obituary as a cultural icon and trainer of several generations of young men and women in the social graces.

My brain felt like one of Mrs. Larowe’s overstuffed suitcases, full of wonderful new things that will take some sorting out. Exhausted but happy, we walked home through the dark neighborhood, realizing it is time to break out my well-lit winter coat again! 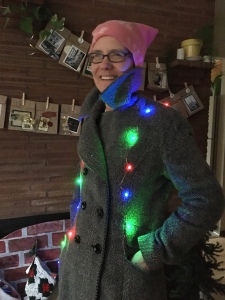