This is my last post (for now) about River View. This one is mostly just questions and delights. I have made a quick run through email sources and historic newspapers of Oregon, and not found enough references to help much.

For example, I am sad that this mom only lived to be 39, but happy that her family decided to include her nickname on her stone.

This headstone, for Domingo V. Ruiz, 2nd Oregon Co. F Private Adopted, 1944, is the only Latin name in the circle of stones dedicated to the 2nd Oregon Regiment. Who is he? Why was he “adopted?” I will do more research and get back to you. 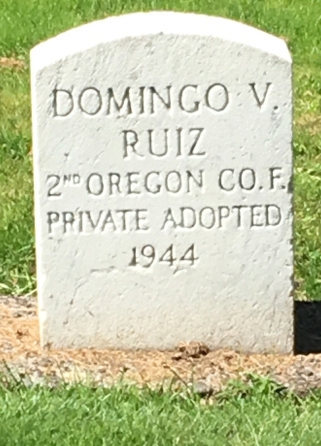 This stone was decorated with little doodads..a heart shaped necklace, some bits of wood. Hmmm. Who was Rocky? A boxer? A flying squirrel?

Mr. Jacob Mueller has a symbol on his headstone that I don’t recognize…it’s not Woodsmen of the World, Odd Fellows, or Masonic, or even the Deathly Hallows. Does anyone recognize it? I have found references from about the right time to suggest that he was a diplomatic to Frankfurt -on-the-Main, a part of what is now Germany, in 1885, and that he had a sister who lived in Estacada, Oregon and a brother who lived in Portland.

Finally, who was May Her Cha? Again, an unusual name for an historically racist cemetery in an historically racist city. There are ads for River View from the early 1900s that actually say “absolutely and exclusively limited to the Caucasian race.” Are some racist dead guys going to be cranky? Or have we finally learned to get along, at least in death?

There were a few other Chinese headstones nearby, the earliest death was 1987. Maybe sometime around then, the despicable policy was changed. Or maybe  Ms Cha, living to be 103, earned some respect!

Off to find more questions!