It has been a long time since I’ve been able to have an adventure with young people. You live far away in Salinas and the shutdown has kept Cousins Jasper and Kestrel inside for almost a year and a half.

So Friday, we headed off. We put on our masks, hopped on the number 2 Trimet bus, and rode clear through downtown to the Lan Su Chinese Garden. This garden was built 30 years ago on a full city block in what has always been the Chinatown section of the city. Skilled workmen came from China with beautiful rocks, tiles and timbers, and built this oasis of beauty and tranquility .

We took off our shoes, the better to feel the variety of stones that pave the paths and bridges of the garden.

It was a hot sunny day, and we appreciated the curvy roofs over the pavilions. The shade made the stones underfoot cool and even allowed some soft moss to flourish. It was wonderful. We were happy to see that the Tea House was open, for take out only, of course. Little tables and stools set right out by the lake made for a gorgeous view as we nibbled steamed buns and moon cakes made with sweet red beans.

When we were fed, we walked around Zither Lake to the bridge. Dozens of koi came up to us, thinking we were going to feed them.

We had learned that the huge yellow-gold colored one is called Cob, (as in Corn-on-the), and Kestrel called the big silver one Luna. We stood on the bridge for a long time, appreciating the colors and movements of the koi as they moved between the sun and the shade. A lady who walked by told Jasper, “They must like your energy.”

Before we left the garden, I asked Jasper to choose a place for he and Kestrel to sit for a photo. He chose this nicely shaped doorway. Here are your handsome cousins!

About two years ago, I wrote to you about a Chinese herbalist who had worked and lived in Portland around 1903. His name was Dr. C. Gee Wo.

Back then, I learned that the doctor was from China and had studied herbal medicine both there and in Nebraska. He married a woman named Saide Celestine Starbuck and then they moved to Portland, Oregon, where he ran offices and sold medicines until he retired around 1921.

Last summer I went in a walking tour of Chinatown here in Portland, and learned that Dr. Wo had been very well known in the city, and had a clientele that included both Chinese and White people.

And then, this morning, it got even more interesting. Kol Shaver, a collector and dealer of antique and rare books in Vancouver, Washington, contacted me. Kol has been looking for information about Dr. Wo to help categorize some of his writings, and found information in my old blog! It made me ridiculously happy to be useful.

Kol runs an on-line shop at zephyrbook@gmail.com and was also able to give me more information about Dr. Wo.

Dr. Wo issued a series of books entitled “Things Chinese” through his Company Chinese Medicine, which had testimonials about his medical treatments. The testimonials within the book indicate he was still living as of 1926. He was also present at the baptism of his grandson Kenneth, born to his daughter Celestine (her mother’s middle name) in 1925.

Kol told me that there is still no information about the Doctor’s burial, but Mrs. Wo and their daughter are buried right here in our own Lone Fir Cemetery, even giving me the section and plot numbers! I could go visit!

But, as Kol told me, if you didn’t know what you were looking for, you’d never find it. Mrs. Wo’s tombstone reads “Sadie Leo, 1868-1927”. Maybe because of anti-Chinese prejudice, they chose not to use their surname “Wo”. Close by is Celestine “Guie” Tongue Cooke, their daughter, who was born in 1898 and died in 1971.

Also nearby is the smaller grave marker of Henry Leo, a son, who was born on August 27, 1903, and only lived two days. I mourned for his parents and little Guie, who would have been just five years old when she lost her baby brother.

I am so happy to have been in contact with someone who is interested in Dr. Wo.

This is my last post (for now) about River View. This one is mostly just questions and delights. I have made a quick run through email sources and historic newspapers of Oregon, and not found enough references to help much.

For example, I am sad that this mom only lived to be 39, but happy that her family decided to include her nickname on her stone. 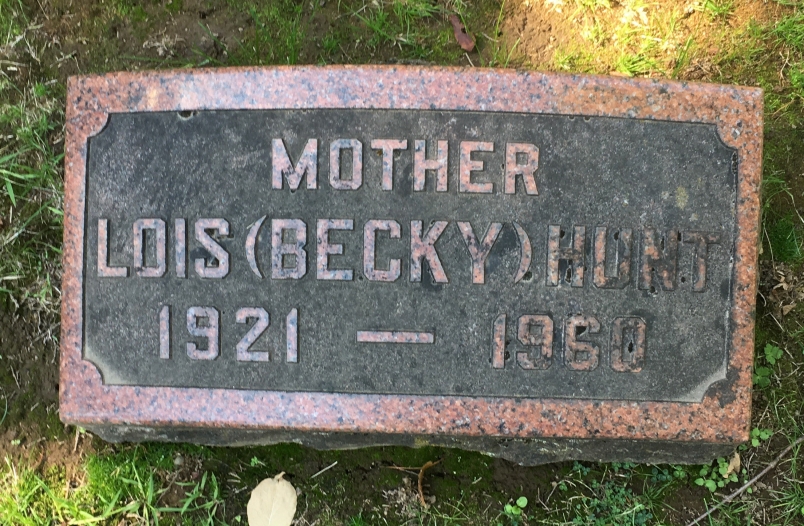 This headstone, for Domingo V. Ruiz, 2nd Oregon Co. F Private Adopted, 1944, is the only Latin name in the circle of stones dedicated to the 2nd Oregon Regiment. Who is he? Why was he “adopted?” I will do more research and get back to you.

This stone was decorated with little doodads..a heart shaped necklace, some bits of wood. Hmmm. Who was Rocky? A boxer? A flying squirrel?

Mr. Jacob Mueller has a symbol on his headstone that I don’t recognize…it’s not Woodsmen of the World, Odd Fellows, or Masonic, or even the Deathly Hallows. Does anyone recognize it? I have found references from about the right time to suggest that he was a diplomatic to Frankfurt -on-the-Main, a part of what is now Germany, in 1885, and that he had a sister who lived in Estacada, Oregon and a brother who lived in Portland.

Finally, who was May Her Cha? Again, an unusual name for an historically racist cemetery in an historically racist city. There are ads for River View from the early 1900s that actually say “absolutely and exclusively limited to the Caucasian race.” Are some racist dead guys going to be cranky? Or have we finally learned to get along, at least in death?

There were a few other Chinese headstones nearby, the earliest death was 1987. Maybe sometime around then, the despicable policy was changed. Or maybe  Ms Cha, living to be 103, earned some respect!

Off to find more questions!

I love researching history! Since my story takes place in 1903 Portland, I am getting to know about people who lived here then, and how things were for them. One thing that was really different was that there were laws against some people living here. These were called Exclusion Laws.

But life usually finds a way, as in the case of Dr. C. Gee Wo, a real Chinese person I have learned about and put into my story. Dr. Wo was from China and was an herbal doctor, using teas and herbal medicines to help make people better. He studied for many years, in China and America, to be good at his profession. He moved to Omaha, Nebraska, where he had a popular practice for eleven years, from 1889 to 1900.

During that time, he married a white lady name C. DeWitt (I can’t find her first name anywhere, just her first initial. Maybe Caroline? Celestine? Charlotte?) In 1900, they moved to Portland, Oregon, and Dr. Wo opened his herbal medicine practice.

At that time, the Exclusion Laws said Chinese people couldn’t own property, so Chinese needed to rent apartments, mostly in the neighborhood on the west side of the river. But Dr. Wo’s wife was white, so she could buy property where they wanted. They bought a small house, and, when business was better, built a bigger house next door.

As the years went on, Dr. Wo became a respected member of not just the Chinese community, but of the city of Portland. He donated to victims of the San Francisco Earthquake in 1906. He contributed to local causes and invested in businesses. He helped the city grow.

Dr. Wo retired about 1915, but stayed active in the community at least until 1921, when he made a large contribution to the local Community Chest fund. I haven’t found any information about him after that time, but I will keep looking. Being a history detective is exciting!